Scirocco II® hose is an alternative to conventional methods of transporting powder through processing systems such as screw, belt or air slide conveyor systems. The hose operates on the fluidization principle in which a granular material is converted from a static solid-like state to a dynamic fluid-like state when a gas is passed up through the granular material. Uniquely, the fluidization system of Scirocco II® is vulcanized into the lower wall of the rubber hose. This incorporates air supply ducts from which small openings lead into chambers covered with a breathing cloth membrane. 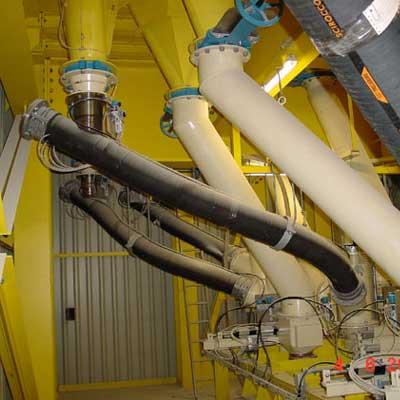 Due to the innovative design of Scirocco II® hose, air flow is equally distributed over the full length of the hose. A precise arithmetic relationship between the inner diameter of the feeder line channel, the choke inlet diameter and the size of the expansion cell means that the entire cross section of the hose can be utilized for transportation. By optimizing fluidization, minimal compressed air is required for maximum transportation and consequentially substantial savings can be made in running costs.

In fact, through a six meter/ 20 foot long Scirocco II® hose that is 100mm/ four inch in diameter, 60 tons of cement per hour can be transported using just 170 liters/ 359 pints of air per minute. In energy terms that equates to the amount of power required to light an eight watt bulb over the same period of time.

Tests have proven that Scirocco II® hoses require significantly less energy than other powder transport systems. In comparative testing against other powder transport systems results show that the Scirocco II® hose takes substantially less energy to move 50 tons per hour of cement over distances of 10 and 20 meters/ 33 and 66 feet. The table below summarizes results.

Another major advantage of Scirocco II® is that due to the flexibility of its rubber structure and its small cross section, the hose can easily be installed in and around existing plant and equipment. For instance, the hose can be mounted around a pillar or passed through openings where a straight screw conveyor cannot be installed due to its rigid design. Often no equipment is required for installation and the hose can be mounted into place by hand. This can reduce upfront engineering and installation costs in new systems and allows retrofitment even into confined spaces.

These factors mean that investment costs compared to other conveyor systems is low. It is estimated that a Scirocco II® installation is virtually half the cost of a belt, spiral or screw conveyor system and around the same or slightly less than a Gatty, fluid or pneumatic system.

With Scirocco II® hoses virtually no maintenance is required

In addition, the Scirocco II® hose is fully sealed from the environment. This prevents the escape of dust and reduces contamination by moisture, making it weather-proof and also shock-resistant. As there are no moving parts in Scirocco II® and due to low friction causing minimal wear of the hose, virtually no maintenance is required.

The grain diameters of suitable bulk products ranges from 15 to 200 m with volume weights between 0.8 to two tons per cubic meter and density varying between two and four tons per cubic meter. In addition it can also be used for fluidizable mixes containing a minimum of 15 percent fines below 20 m with the maximum grain size not exceeding one to two millimeters.

Scirocco II® is manufactured in lengths of up to ten meters/ 33 feet. Longer lengths can be created by joining several hoses with flanges. Diameters range from 76 to 250 millimeters/ three to 10 inches.

For 10 years, numerous customers have been using our Scirocco II® with success.